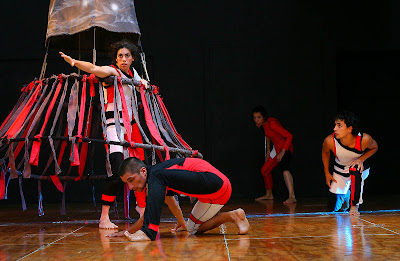 Nonetheless in places like Chile and other Latin American Nations, they have started to turn back the pages of history and are exploring as the photo above suggests.
They are not necessarily interested in the roles, now presently, which were performend during pre - 1880s. However, as the years of additional research contuinues, and field cultural explorations in both African and Espana continues, they will eventually start to take up and perform once again the fertility, sexuality, and mating Latina Danza de Arte dances of this glorious past.
It has alraady started in Brazil, and Cuba is now knocking at this cultural door, topless, traditional proper presentations themselves.
Mr. Roger M. Christian
Posted by Ithaca Night Life, NY at 1:45 PM

Latin dance is a wonderful dance to learn. It forms a good relationship between friends and partners. It contains various styles of dancing techniques. It includes Guanarcha / Guanguanarcha.

Latin dance is a partner dance that refers to various forms of ballroom dance and folk dance, and can include a wide range of dances originating in Latin America (including Puerto Rico and Cuba).

Latin dances stems from the poor Europeans and negro slaves. As a recreational activity, these slaves would create music with the beat of the drums or with the mere tapping of feet. This form of music developed over the years, into Latin music for such dances.Thanks:)

Salsa is a word that inspires an instant reaction in Latin music lovers everywhere. It is the rhythm, the dance, the musical excitement that sends millions of normally sedate non-Latinos to the dance floor where they meet their Latin neighbors, who are too busy enjoying the music to notice.